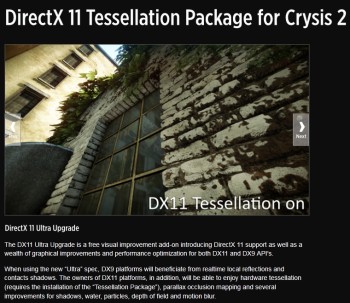 Crytek has announced that the long-awaited Crysis 2 DirectX 11 and Hi-Res Textures update will arrive next week.

Rumors of a DirectX 11 update for the already hot-looking Crysis 2 first bubbled up back in March, followed by a quick, semi-sort-of denial from Crytek, which responded to reports of the update with a forum post stating, "No patch was ever confirmed, I have no idea why this website even posted such information." But Crytek's biggest problem with the news of the update seemed to be not that it was untrue, but that it came from an unofficial and unsanctioned source.

In any event, it was true and today the studio revealed that it's actually less than a week away. "The DX11 Ultra Upgrade is a free visual improvement add-on introducing DirectX 11 support as well as a wealth of graphical improvements and performance optimization for both DX11 and DX9 APIs," Crytek wrote in an announcement of the package that was apparently premature and has since been pulled but remains on NeoGAF.

"When using the new 'Ultra' spec, DX9 platforms will benefit from realtime local reflections and contact shadows," it continues. "The owners of DX11 platforms, in addition, will be able to enjoy hardware tessellation (requires the installation of the 'Tessellation Package'), parallax occlusion mapping and several improvements for shadows, water, particles, depth of field and motion blur."

The "Crysis 2 DX11 and High Res Textures Update" comes out on June 27 and will require the newly-released 1.9 patch, a video card that supports DirectX 11 and of course the PC version of Crysis 2. For more information, keep an eye on MyCrysis.com.