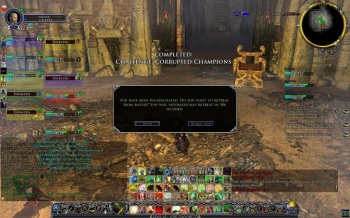 Players in LotRO have been complaining about the same issue for approximately a month, but administrators keep on saying it's not a known issue.

Anyone who's spent time playing MMOs has encountered a glitch or two during their time online. And, most likely, we all know what the proper course of action is: Report the problem via the forums, get the issue resolved, and enjoy the silky smooth gameplay that follows. Unfortunately, this isn't the case in Lord of the Rings Online, where a problem that's repeatedly been reported by gamers seems to be being ignored by Turbine's GMs.

It turns out that for roughly the past month, LotRO players engaged in Tier 2 Challenge Mode quests have been been getting the proverbial shaft when it comes to loot. Here's how said quests work: They're designed for skilled players who are willing to risk extreme difficulty for an extra reward chest, which includes bonus loot like second tokens for teal armor pieces, a First Age Symbol, and/or additional gold and teal items. According to James McCoy, the user who contacted The Escapist via email, though, "...for the past 3 or 4 weeks, that has not always been the case."

It has been reported when doing some Tier 2 Challenge Modes that the second chest is not dropping. This was happening when you first released the raid. At that time you acknowledged this problem and gave us a fix. This time however, since Update 3, this is not the case. Your in game GM's are getting the tickets and we all seem to be getting a cut and paste response of, "This is not a known issue.." and the ticket is closed. If it's not a known issue, why is it being talked about so much on your forums? I am a IT manager and my first response to a paying customers is never "This is not a known issue, sorry I can not help you" If I did, I would not have a job.

So far, this whole situation looks pretty damning for Turbine. When you have this many complaints about the same issue on your hands, the least you could do is investigate the issue and actually make your users feel like they're being listened to.