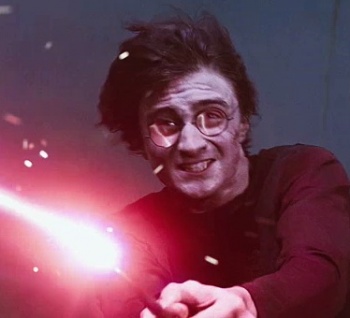 J.K. Rowling announced plans for an interactive website and Harry Potter ebooks, but no new novels.

The Escapist reported on a mysterious countdown on YouTube last week and Mr. John Funk cleverly guessed that Pottermore.com would be a sort of interactive website or social network. J.K. Rowling, author of all things Harry Potter, stayed true to her countdown and announced her plans in London this morning. Pottermore.com right now just asks for your email, but promises to eventually be a way to engage with the novels on a different level than merely reading them. Kids will be able to have their house chosen for them by the Sorting Hat, or visit Diagon Alley to go wand-shopping, and Rowling said that more than 18,000 words of new material such as character backgrounds are a part of Pottermore.com.

"I wanted to pull it back to the reading, to the literary and story experience," said Rowling, who oversaw the whole process over the last two years. "I've had a lot to do with virtually every aspect of it."

When the site launches on July 31st (Harry's birthday), the first million registered will participate in a beta test to fine tune the experience before Pottermore opens to the unlimited public in October. At first, the material will only cover the first novel, but content from the Chamber of Secrets will go live in 2012.

The plan is part of Rowling's efforts to make her books appeal to the next generation of potential Potter fans, which is another reason for her to offer the electronic versions of her books, also starting in October. So far, Rowling resisted the idea of ebooks, but she admits that it is impossible to stand in the way of what she calls progress.

"It is my view you can't hold back progress," Rowling said. "Ebooks are here and here to stay. Later than a lot of people, I for the first time downloaded ebooks and it's miraculous for travel and for children in particular. I feel great about taking Harry into this new medium."

Unfortunately for Potter fans, Rowling emphatically stated that she will not write any more novels set at Hogwarts. "I have no plans to write another novel. I'm pretty sure I'm done on the novel front," she said. "But it was fun while it lasted."

"I do have closure with Harry." Yes, she does, and after the final film premieres next month, I suppose I will too.

That is, until my daughter is of reading age.