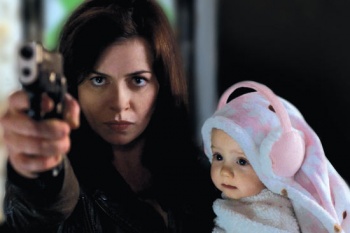 Timing and suitability of material are said to account for the disparate versions.

Miracle Day, the fourth season of the Doctor Who spinoff Torchwood, will be different depending on whether you watch it in the UK or the US. That's according to the editor of the official Doctor Who Magazine, Tom Spilsbury.

Posting on Twitter earlier in the week, Spilsbury said that some content would be removed from the US version because of episode timing, while other content would be excised from the UK version because it was unsuitable to be shown on the BBC. Spillsbury said that the BBC version wasn't being censored per se, but didn't expand on what was actually going on. He also baited the hardcore fans by posing the question of which version would be the "proper" version, and entreating them to "PANIC!"

It's not clear how different the two versions will be, but one would assume that the changes won't be too substantial; making two vastly different shows doesn't make a great of sense from a cost perspective. What's much more likely is that the BBC has removed instances of product placement, which is illegal in BBC shows. The differences will almost certainly be inconsequential to the plot.

Torchwood: Miracle Day airs on Starz on July 8th. As yet, there's no confirmation when the show will air on the BBC.