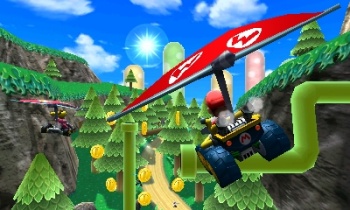 Analyst says that it's not just princesses that Mario will be rescuing when he arrives on the 3DS.

Analyst firm Interpret says that the reason that sales of the 3DS have been lower than expected is not due to a lack of interest in 3D gaming on the part of consumers, but because Nintendo messed up the console's launch, by not having a strong enough launch library.

"Nintendo put the cart before the horse," said Michael Cai, Interpret's VP of games and technology. He said that Nintendo had failed to properly capitalize on the interest that surrounded the device before its launch, which according to the most recent Interpret report was down 27% from the same time last year. Cai said that consumers wanted Nintendo's big franchises like Mario and Zelda, and that until they got them, the 3DS would struggle for sales.

Cai also thought that gamers would push the adoption of 3D TVs more than any other group, despite the apparent lack of interest in the 3DS. He said that core gamers were much more likely to purchase a 3D capable television in the next year than the average consumer.

Nintendo has just released, or rather re-released, Legend of Zelda: Ocarina of Time, and has 3DS versions of more of its big franchises in the pipelines. If Cai is correct, these releases should rekindle interest in the 3DS and sales should take off.