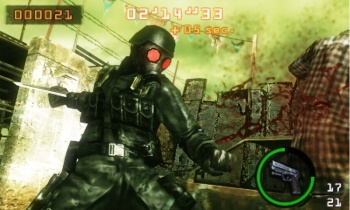 Capcom says it didn't do it on purpose, but it seems to have found a perfect way to stop pre-owned sales.

UK retailers HMV has announced that it will not accept used copies of Resident Evil: The Mercenaries as part of its RePlay pre-owned scheme. It was discovered earlier this week that saved games could not be deleted, significantly reducing the game's resell value.

According to the company's PR boss, Gennaro Castaldo, HMV took the decision to avoid any customer disappointment. New copies of the game will be available from HMV, but purchasers will have to go elsewhere if they want to trade it in. Other retailers around the world are also reconsidering their stances regarding the game. EB Games Australia is refusing to stock the game because the permanent saves makes resale and returns very difficult, and GameStop has reversed its decision to accept used copies of the game.

Capcom has denied that its decision was meant to curtail trade-ins, but it hasn't really come up with any other satisfactory reason why it would make save games permanent. A statement from Capcom avoided the question completely, and instead stressed the high level of replayablity built into the game.

Even if you're willing to Capcom the benefit of the doubt and accept that it didn't intend to make its game effectively worthless to the pre-owned market, it's impossible to deny that it's done a pretty amazing job of it. Capcom is presumably hoping that it will sell more copies, and it will be interesting to see if it actually does.