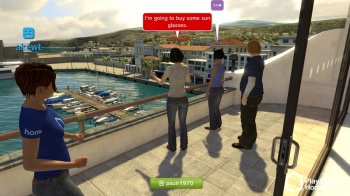 Sony admits that the launch of Home could have gone better, but says the service is getting better all the time.

It's easy to dismiss Home on the PS3 as the domain of the casual gamer, but according to the services overseer, nothing could be further from the truth. Sony's Jack Buser says that the average Home user is actually way ahead of the curve when it comes using their PS3s.

Buser said that Home users were "rabid consumers of media and hardcore gamers," watching more movies and playing more games than the average non-user. Buser said that the service had around 20 million users, and the average session time in apparently around 70 minutes. People used it in different ways, he said, with some dipping in and out between games, and other literally spending hours and hours at a time in Home.

However, while Home is hardly a flop, Buser admitted that the launch could have gone better. When the service launched in 2008, there wasn't a great deal to do, and Buser thought that some people had been put off by that initial experience. Not only that, but Sony learned that just sticking a bunch of gamers in a virtual room together wasn't actually the best way to get them talking to each other.

"It seems obvious in retrospect, but it wasn't obvious back in 2008," he said. "We thought 'here, we'll build these rooms and we'll fill them with gamers and we'll theme these rooms after games and then people will self-select and talk to each other.' What we discovered very early on, even in closed beta ... we realized that gamers talk to each other and they meet each other in the context of playing games."

Buser was coy about whether or not Home actually made Sony any money however, only saying that microtransactions - which Home makes heavy use of - tended to be profitable due to their low cost and the level of traffic on the platform. The service isn't about to lose its "beta" tag any time soon either, as Buser said that it reflected Home's constantly evolving status.