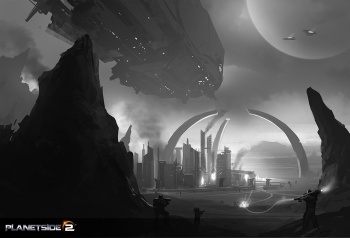 The first MMOFPS is getting a major upgrade.

The fact that Sony Online Entertainment was going to announce a sequel to one of its most ambitious franchises at Fan Faire 2011 was not a secret held tightly to the chest by CEO John Smedley. Still, fans of the massive and persistent world gameplay of the first Planetside, released all the way back in 2004, were clamoring for something, anything, about the sequel beyond the scant few screenshots and rumblings. Those fans were not disappointed when Smedley introduced the creative director of Planetside 2 at Fan Faire 2011 in Las Vegas last night. Matt Higby gave some great insight on what to expect from the sequel - including a new resource system, the ability to level up when you are not logged in, and a dynamic skill tree - but we still don't know when the game will come out or even what platforms it will include other than the PC.

"Planetside 2 is going to revolutionize first person shooters," Matt Higby said after his big speech in front of the crowd at Fan Faire. "It's going to be a remarkable experience for people who have never played this kind of game before. MMOFPS is an underused genre, and we feel like now we are now able to deliver on an MMOFPS in a way no one else - including ourselves."

Higby was a designer on the original Planetside, so he saw the ambitions that SOE had with the game that were unfortunately limited by the technology of the era. Moore's law has made computers much better equipped to deliver the speedy networked play that is necessary for an FPS to thrive.

"The original Planetside was limited, and I think that's because it was ahead of its time," said senior art director Tramell Isaac, who also held that title for the first game. "If we had released it maybe two or three years later, it probably would have been one of the biggest MMOs out there. But now we have the technology and broadband has proliferated throughout the world."

The technology that Isaac is referring to is the new MMO engine SOE has been cooking up with Nvidia called Forgelight. Using the PhysX API from Nvidia will allow Forgelight to shine, especially with the vehicle maneuverability which is more fully featured than the "camera-driving" of the first game. Planetside 2 will be the first game released using Forgelight, but Smedley also announced that SOE is working on another EverQuest sequel using the new engine.

But what will Planetside 2 feature that will set it apart not only from its predecessor but from other shooters? First off, there will be classes - a couple that were mentioned but not detailed were medic, engineer and assault - that can be switched on the fly, but will dictate your role on the field. Characters will be able to progress the skills of each class to unlock more options, but Higby is careful that noobs will not feel marginalized.

"We don't want new players to be significantly outclassed by veteran players," Higby said. "We're only talking about having a 15 to 20 percent differential between the player who has unlocked nothing and the highest player who is maxed out, including things like squad benefits and outfit benefits."

Outfits are the equivalent of guilds in Planetside and Higby wants these groups to be able to differentiate themselves through Outfit-wide skill upgrades, as well as cosmetics. "I always use the example of the 101st Airborne [Division] in the American Army," he said. "These guys, when you see them, you know that's a badass paratrooper. We want Outfits in Planetside 2 to feel the same way."