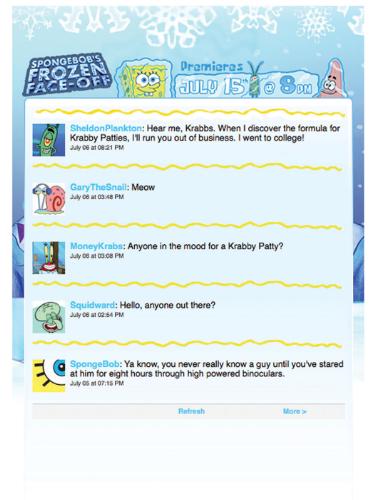 Who tweets from a pineapple under the sea?

One of Nickelodeon's biggest stars, the loveable SpongeBob Squarepants, is going all Web 2.0 with a brand new story told exclusively on the social network, Twitter. The story, called "The Ice Race Cometh" will also serve as a run up for the SpongeBob primetime special "Frozen Face Off," which airs on July 15th.

In "The Ice Race Cometh," a mysterious and wealthy entrepreneur offers a million dollar grand prize to the winner of the "The Bikini Bottom Great Sleigh Race." Over the course of three days, race participants, which includes SpongeBob, Squidward, and - rather bizarrely - Gary, SpongeBob's pet sea snail, will tweet back and forth in anticipation of the race itself.

Roland Poindexter, Nickelodeon's senior vice president of animation and current series, said that Spongebob had a wide appeal and was popular with adults as well as kids. The Twitter story, he said, would give those fans a new way to experience and enjoy Spongebob's adventures. According to Poindexter, Spongebob is already a big deal on social networking sites, with more than 25 million fans on Facebook.

Obviously, this is as much a marketing stunt as it is an effort to give fans more ways to experience the magic of SpongeBob. That said, it's not a bad way to drum up some extra excitement, as it doesn't require people to really do anything, and it's not particularly resource intensive. "The Ice Race Cometh" starts on Tuesday July 12th, and runs until July 15th.

Escapist Podcast - Movies and TV: 014: That One Time TMNT Was A Huge Hit Team Hollywood 10 Comments
Comments on