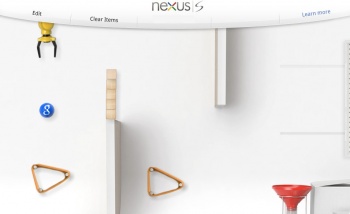 Search engines, social networks and now intensely addictive casual games; is there anything Google can't do?

The game is called Nexus Contraptions, and it's completely sucking my will to type any of these words.

In essence, the game tasks players with crafting a Rube Goldberg-style array of devices capable of moving a ball into a funnel. It seems simple (and thanks to a drag-and-drop interface it is) but the later levels offer really devious construction possibilities. Don't blame me if you spend the rest of the day strategically arranging rubber bands.

It should be noted that this game is something of an advertisement for Google's Nexus S Android phone, though the marketing push is very subtle. Yes, the thing is branded with the phone's logo, and in theory the end goal is to construct one of the gadgets, but it's less intrusive than any of the spam email you'll see today.

Also, I should point out that Nexus Connections is built on top of YouTube, somehow. My coding wizardry begins and ends at HTML bold tags, so don't ask me how it's done, but apparently someone at Google thought the challenge of constructing a wildly addictive game on top of a video sharing site would be entertaining.

If your interest is suddenly piqued, or you really hate being gainfully employed, you can find the game on YouTube.

If I can editorialize for a moment, this game makes me wonder why we don't see more of its type these days. Remember The Incredible Machine? Those games were both incredibly fun and instilled an interest in physics and engineering in even the youngest children. It's a rare formula that is entertaining and educational, and given the detailed physics simulations and gorgeous graphics tech in modern consoles and computers, it's a shame we don't see developers tapping it more often.

Sure, I like the Diablo formula. Picking up tons of color-coded loot never gets old, but sometimes I just wanna throw conveyer belts at a problem until a solution appears.