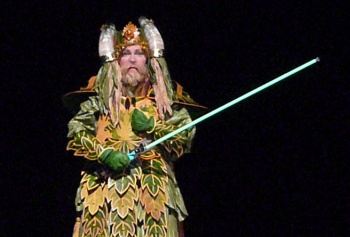 CEO John Smedley says it was a good decision to let the license for the venerable sci-fi MMO expire, as if a million voices cried out and were suddenly silenced.

Star Wars Galaxies has been around for eight years. Launched in 2003 to much fanfare, players were excited to inhabit the world of Lucas' Star Wars original trilogy. Of course, the open world, er, galaxy, mechanics didn't satisfy all MMO players, and SOE tried to correct some of the game's errors with a major update in 2005 that only ended up pissing the fanbase off even more. Galaxies survived six more years, but last month SOE sadly announced that it will turn off the servers for good on December 31st , 2011. Taking the stage at the opening address at SOE Fan Faire 2011 as a EQ dwarf holding a lightsaber, community Relations director Linda Carlson lamented the game's closure and implored the fans to celebrate the time they have left in Galaxies, a sentiment which CEO John Smedley echoed. But unfortunately, Smedley said that it was time for SOE's license with George Lucas' company to end.

"It breaks the heart of everybody that this world has to come to an end," said Carlson. "When the final announcement was made, you could feel the reverberations through the company. We felt it here," she said gesturing to her heart, "and it hurt." She then played a video the devs made celebrating some of the iconic moments, characters and settings of Galaxies.

"Jedi, bounty hunters, entertainers, the whole lot of you, I salute you," said Carlson. "But you know what? We're not done yet. We still have seven months to get together, we can celebrate the game, we can share our memories, we can still have a hell of a good time. I hope you join us all as we follow the last few months of Star Wars Galaxies."

If so many members of SOE cared about the game and its fans, then why was the decision made to end the game after so many years?

"It was time to turn it off. We have a contractual relationship that's ending in 2012, The Old Republic launching, a bunch of other business things with LucasArts," Smedley said. "And then you look at the odds of a pretty large portion of the audience moving to TOR, which looks like a terrific game. I think that's going to be really well-received by the population." You can't deny Smedley's business sense there.

"But it hurts," Smedley said. "We knew, with the checkered past [of Galaxies], that this would not be a popular decision, but it was just one that we had to make."

If the intellectual property of Galaxies was wholly owned by SOE, then the decision might have been moot because the game would likely continue to make money for a long time, even with TOR lurking. "That's the problem with licenses: they end," Smedley said. "We're going to continue to do some licensed work, but we're largely going to stick to original IP [going forward] because then we won't have this issue. We'll never have this problem with EverQuest."

Interestingly enough, Smedley said that SOE had already renegotiated to extend the license a few times. "Back in 2001, not '03 when we launched, but back in 2001 when we [first] negotiated it, a five year license seemed like a really long god damn time," Smedley said. "EverQuest was only a year or so old at that point. Could we have renegotiated? Maybe, but I don't think that would be the right thing for the company."

Still, the closing of Galaxies clearly affects John Smedley. "I'm bummed about it," he said with a frown, and I believed him.

Because of the somewhat early announcement that the servers will turn off at the end of December 2011, SOE has some great plans in store for the ending of the game's eight-year run. "The team is working on all of the details," Smedley said. Is the Death Star going to blow up again? "I don't know about that but they've got something else in mind with the Galactic Civil War. I think [Star Wars Galaxies] is going to go out in a memorable way. With a bang, not a whimper, that's for sure."