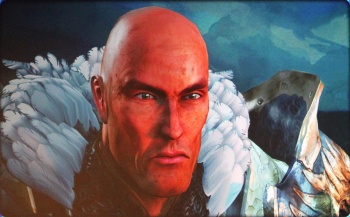 At the core of the next wave of MMOs from SOE is a pretty new engine.

John Smedley, CEO of Sony Online Entertainment, couldn't resist showing off his new toy. His tech team and the team behind Planetside 2 are building a new core engine called Forge Light which will have all of the tech bells and whistles needed to bring SOE's new MMOs into the next generation. Partnering with Nvidia to build in use of the PhysX API has allowed some amazing complexity to everything from the physics of vehicle movement in Planetside 2 to the expression of a characters face in the next EverQuest title.

Smedley spent a good portion of the opening address outlining every bullet point that Forge Light will bring to SOE's games. The biggest change is that SOE is finally bidding farewell to discrete zones with loading screens between them but the rest of the the laundry list of features was full of technical jargon like real time radiosity, advanced particle lighting and volumetric fog.

"What does all this mean?" Smedley asked. "Think about this, EverQuest players, think about a physics engine that is built into every single aspect of your gameplay. We've partnered with Nvidia and their amazing PhysX platform. It means that we can bring you the most amazing characters and environments ever seen before in an MMO, or a single player game."

Such a claim was followed up with a static image of a character face from EverQuest Next, which is the internal codename for the sequel SOE is working on. The image by itself wasn't very impressive, but you could clearly see the expression of displeasure on the man's face, the textured skin and the slight rise of the right eyebrow. We didn't get to see any footage of Forge Light in motion, but the first game that sprang to mind as a comparison was L.A. Noire. If SOE can bring that level of human emotion to MMO characters, then games made with Forge Light will really be impressive.

For the creative director of the entire EverQuest line, Dave Georgeson, the real benefit of Forge Light will be in roleplaying your EQ toon. "For the people that love to roleplay, to stand around and talk to each other, the facial expressiveness [that Forge Light will provide] is huge," he said. "It gives them almost everything that they want."

I asked if the emote system for EQ Next will be revised to give tighter control over your toon's face and expressions. "Oh yeah, there's so much that I wish I could tell you right now [about that]," Georgeson said. He hinted at using some of the technology that was shown at E3 this year that could take images from a webcam and transfer them to a digital character. "Even if someone doesn't want to sit there with a webcam watching your face, which people won't want to do all the time, they can still set up these elaborate macros," Georgeson said.

Forge Light looks like an exciting new way to bring MMOs to gamers, and will offer all kinds of things that we've only just imagined. Plus, with a next-gen core engine in place, SOE will hopefully be able to build worlds that much more effectively. Despite the hacking fiasco this May, and the closure of Star Wars Galaxies, the tone at SOE Fan Faire 2011 was excitement for what's to come.