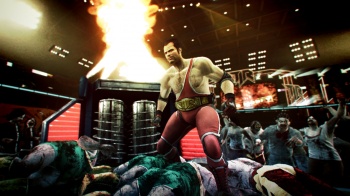 If you're a Dead Rising 2 fan and pick up the spin-off title, Off the Record, this October, you might notice that there are more zombies than you remember from the main game. Quite a lot more, in fact: Capcom has upped the zombie count around a third for Off the Record. Why, I hear you ask? Two words: Frank West.

Off the Record is a non-canon retelling of the Dead Rising 2, with Frank West - star of the first Dead Rising - as the hero. Capcom Vancouver - the new name of Dead Rising 2 developer Blue Castle Games - has made him tougher and better armed than Chuck Greene, which naturally, this means that it takes a lot more zombies to present a proper challenge. "This time ... we actually managed to up the zombie density and have the world be a little more dangerous for [Frank]," he explained. "In places, we upped the density by at least 30%. There are probably a few thousand zombies in any one environment."

Capcom seems to be rather keen for players to have fun with these extra zombies, with orders coming down from the head office in Japan that Capcom Vancouver should include more weapons that are less about destroying zombies, and more about playing with them.