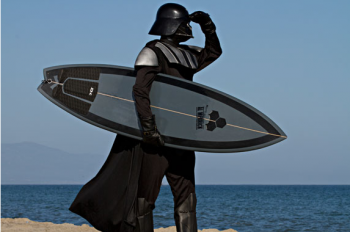 Most people don't stop and consider how hard it is being the Dark Lord of the Sith. Between the executions of disappointing minions, mutilating one's son in a lightsaber battle, and overseeing the construction of a new Death Star, it's easy to feel overwhelmed. So, every now and then, Lord Vader has to cut loose and unwind; on his latest vacation, his activities were documented by photographer Nick Presniakov.

OK, so the whole photo series is actually a pretty brilliant spoof by Presniakov. The photo series, "Dark Holiday", shows Vader visiting a seaside resort town to relax as best he can, which includes watching bad hotel TV, riding around on a Segway, and going surfing in a custom wetsuit.

Hopefully Lucasfilm doesn't go after the photographer and demand he take down the photos. The company is notoriously controlling over its Star Wars properties. If Presniakov manages to, y'know, not get sued, maybe he can do another series with some other Star Wars characters.