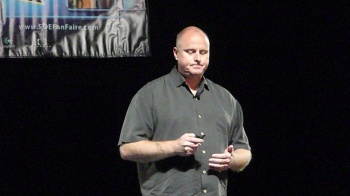 All SOE games were inaccessible for 12 days due to hackers, and John Smedley opened Fan Faire with a heartfelt apology.

As part of the massive attack on Sony's PlayStation Network, Sony Online Entertainment - the MMO and online game division of the company - revealed that its servers had also been infiltrated. On May 2nd, SOE reported the theft of tens of thousands of credit card numbers and immediately brought down the services for all its games (including EverQuest 1 & 2, DC Universe Online and Free Realms) in order to make sure that security was tight. Services were restored on May 14th, and SOE offered a hefty rewards in compensation for the downtime for each of the titles affected. This weekend, at the annual SOE Fan Faire, the CEO and president of SOE, John Smedley, opened his address to the community by saying he was sorry.

"I want to give you a personal apology from me," Smedley said. "Back in April, as many of you know, we were hacked. We were victims of a very bad cybercrime, a cyber attack, not just on our network, but on our sister company's networks the PlayStation Network and Quirocity.

"They may have accessed your data, my data, on all of our game networks and I'm very sorry for that," he continued. "It was a very deeply troubling incident for us. I can tell you that we did not rest as we were investigating this. We brought in the best cybersecurity experts in the world. I want you to know that your data is a big deal to us and we take this very seriously. It's something that we are going to insure doesn't happen again.

"We're sorry for it, and we hope we didn't inconvenience you too much with the time that we were down but all I can say is that we're sorry." The crowd of gamers gathered for Fan Faire then applauded Smedley's honest apology.

Smedley then took the opportunity to announce that SOE will now be implementing key fobs that work exactly like its competitor's World of Warcraft authenticators to provide an extra level of security when accessing Sony's servers. In fact, the authenticators come from the same manufacturer as WoW's key fobs: when signing into the game, in addition to your password, you are prompted to enter a random unique 6 digit code generated by the device.

Everyone at Fan Faire received a free authenticator, but the rest of you can purchase one from Sony for $9.99. Smedley also said there'd be an iPhone and Android app that can function like an authenticator coming soon.

You can find out more about the SOE Authenticators here.