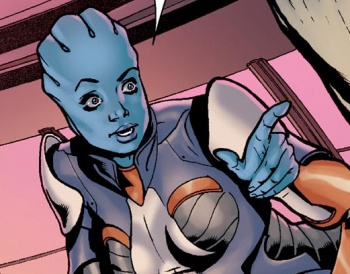 For the next 24 hours, Dark Horse Comics is offering the entire breadth of its two Mass Effect comic series free of charge.

This generous move comes in anticipation of the upcoming Dark Horse/BioWare panel at this year's San Diego Comic Con (scheduled for July 23).

This also serves to generate hype for the newly announced Mass Effect: Invasion comic, which Dark Horse will launch in October. From the official announcement:

With a story by Mass Effect lead writer Mac Walters and an original script by John Jackson Miller, best known for his work on Star Wars: Knight Errant, and art from Omar Francia who also did work on Star Wars: The Force Unleashed 2, Mass Effect: Invasion focuses on Aria T'Loak, a self-appointed queen of Omega, a space station catering to the galaxy's underworld. T'Loak is a key figure in the Mass Effect universe and must defend her territory from a terrifying new threat unleashed by the pro-human black-ops organization Cerberus. Mass Effect: Invasion will launch its first issue this October.

The bad news is that word of this publicity stunt has washed over the Internet geek culture like a voracious swarm of geth. Prospective fans have flooded the firm's servers, and the Dark Horse Digital Store is currently down.

The promotion ends on July 14 at 3PM EST, so hopefully at some point in the next 21 hours the flood of server requests will abate. Until then, find some way to amuse yourselves. I hear BioWare is making interesting games these days.