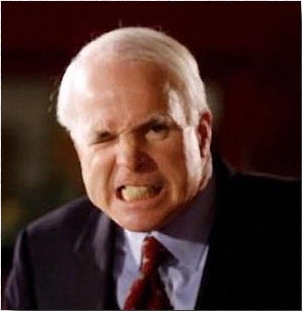 With the recent attacks on videogame companies like Sony and so-called internet security firms like Booz Allen Hamilton fresh in everyone's minds, John McCain wants action. The hacktivism phenomenon is not limited to the private sector, government agency websites like the CIA have been brought down through DDoS attacks but, more importantly, the leaking of sensitive data to organization like WikiLeaks and more invasive thefts of personal information at firms like HB Gary are serious threats to national security. McCain thinks the problem is that no one group in Washington is tasked with dealing with these issues.

"With so many agencies and the White House moving forward with cyber security proposals, we must provide congressional leadership on this pressing issue of national security." In short, there are too many cooks in the kitchen.

"I write to renew my request that the Senate create a temporary Select Committee on Cyber Security and Electronic Intelligence Leaks. I feel this Select Committee is necessary in order to develop comprehensive cyber security legislation and adequately address the continuing risk of insider threats that caused thousands of documents to be posted on the website Wikileaks," McCain wrote.

While I didn't vote for McCain in 2008, I always respected him as a leader who knew shit from shinola. He's absolutely correct here that there needs to be a designated government body overlooking the whole cyber-security issue from a top-down perspective instead of hacker groups like Anonymous being the hot potato that no one wants to hold.

On the other hand, maybe the Senators are just worried that they'll be hacked ...

Shaken Up MovieBob 43 Comments
Comments on