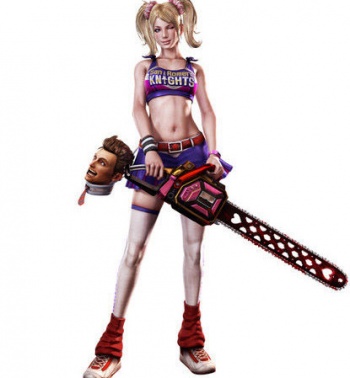 You may know Grasshopper Manufacture as the Japanese game development firm head by Goichi "Suda51" Suda. The company has been creating games since 1999, and though it has never had a real blockbuster hit, the firm's quirky, satirical, hyper-violent games often attract a devoted cult audience. No More Heroes, Killer7 and the recent Shadows of the Damned are beloved, even if they didn't exactly ignite the sales charts.

Continuing this trend of developing games blatantly aimed at appealing to members of my generation, Grasshopper has unveiled Lollipop Chainsaw.

Not much is known of the game so far, though Famitsu has a few important data points. The basics are all covered -- the Suda51-designed game is in development for the Xbox 360 and PlayStation 3, with a release date still up in the air -- but otherwise the information included in the Famitsu piece is bizarrely specific.

1. Zombies first appear in Juliet's school on her 18th birthday. Don't worry -- it's totally okay to take a peek!

2. Juliet is a cheerleader at her school.

3. Juliet's school, San Romero Highschool, is located on the West Coast (that would be of America, I believe) and is the largest school in the region.

4. Juliet's chainsaw is full of pink because pink is her favorite color.

As you probably gathered, Juliet would be the game's protagonist. She's a cheerleader tasked with slaying zombie hordes and has thus ditched her pom-poms in favor of a chainsaw. Honestly, it's pretty standard stuff for Suda51.

Alongside the above details, Famitsu also has a host of screenshots from the game. Those of you incapable of speaking Japanese can attempt to blindly navigate the Famitsu site, or simply click through to Andriasang to see the images wrapped in a comforting shroud of English text.

Unfortunately for those of you suddenly interested in this game, we have no confirmation that it will be leaving Japan. Games centered on zombies have traditionally been a solid fiscal investment for publishers here in the States, but Grasshopper's titles have been hit or miss, financially speaking.

Still, I've got my fingers crossed that Lollipop Chainsaw can jump the Pacific. Suda51's hyperactive storytelling and game design elements combined with zombie-heavy survival horror, starring a cute-as-a-button cheerleader with a propensity for overkill in the form of a gas-powered chainsaw? That's a premise that I can totally get behind.