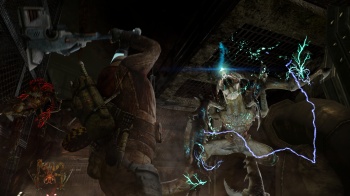 Despite a big marketing push for the Red Faction series that included a live-action Syfy film, Red Faction: Armageddon, which came out in June, apparently did not blow anybody's doors off. "We are disappointed in our first quarter financial performance," THQ President and CEO Brian Farrell said in the company's first quarter financial report. "Sales of Red Faction: Armageddon and our licensed kids titles were below our expectations, and the late release of UFC Personal Trainer also adversely impacted the quarter."

Because of that, and of the inability of the series to gain traction with gamers, THQ has decided to stick a fork in it. "Given that the title, now in two successive versions, has just found a niche, we do not intend to carry forward with that franchise in any meaningful way," Farrell said in a follow-up investors call. "In today's hit-driven, core gaming business, even highly-polished titles with a reasonable following like Red Faction face a bar that continues to move higher and higher."

THQ laid off 16 Volition employees in May but at this point it doesn't look like the end of Red Faction will lead to further, deeper cuts: according to Develop, the Red Faction team has been folded into Guillermo del Toro's Insane project.