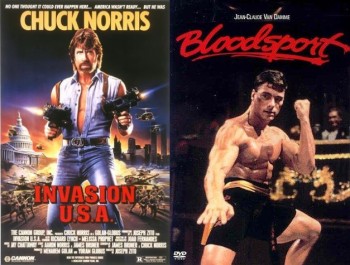 Word on the street is that Chuck Norris, Jean-Claude Van Damme and John Travolta have all signed on for the upcoming all-star action fest Expendables 2.

Let's be honest about it: The Expendables sucked. It was awesome seeing almost every big-name action star from the 80s and 90s get together for what promised to be a no-holds-barred blowin'-stuff-up blowout but the actual film, as much as it hurts me to say it, was pretty lame. But if there's one thing I learned from the golden age of action films, it's that there is no problem in the world that can't be solved through the judicious application of violence, and so it is that The Expendables 2 will attempt to redress the shortcomings of the original film by adding a couple of guys with a penchant for pummeling.

First up is the Muscles from Brussels himself, Jean-Claude Van Damme, the man who took the ability to do the splits on command out of the realm of women's gymnastics and made it one of the most devastating maneuvers ever employed in single combat. And then, perhaps even more awesomely, is Chuck Norris, the man who can believe it's not butter and who prefers to punch out the enemies of America rather than shoot them because for him, it's faster, easier and way more effective.

Last but not least is John Travolta, who's not an action star in the strictest sense but did some very respectable turns in films like Broken Arrow, Face/Off and Swordfish, and who, rather like Mickey Rourke, is probably there more for his actual acting cred than his body count.

News of the cast additions comes not from Lionsgate, which hasn't yet made any official casting announcement, but from David Varod, the CEO of Nu Boyana Studios, where The Expendables 2 is expected to be filmed. Varod also told Bulgarian website Novinite.com that the sequel will not be directed by Sylvester Stallone but by Con Air director Simon West.

Take it for what it's worth coming from a man who looks like a Con Air passenger himself, but if it's true, it'll be awesome. Now all we have to do is get Steven Seagal and we'll have everyone. Everyone! Well, except for Jean Reno and Gary Oldman, I suppose. Maybe they'll sign up for Expendables 3.

The Expendables 2 is currently in pre-production and is expected to come out sometime in 2012.

via: Hitfix, thanks to AvsJoe for the tip.