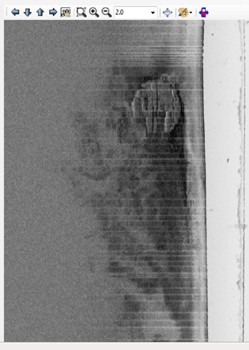 Swedish treasure hunters have discovered a mysterious object on the bottom of the ocean that bears an uncanny resemblance to a crashed UFO.

On June 19, the Ocean Explorer team, commanded by Peter Lindberg, made a baffling discovery: a 60-foot-wide disc lying in the mud at the bottom of the Gulf of Bothnia between Finland and Sweden, 285 feet below the surface of the Baltic Sea, and with what looks like impact tracks extending away from it for almost 1000 feet.

"You see a lot of weird stuff in this job but during my 18 years as a professional I have never seen anything like this," Lindberg said. "The shape is completely round... a circle."

Lindberg, for the record, isn't the one who suggested that this could be a crashed flying saucer. That idea came up once the sonar image was made public and it has led to some interesting, and occasionally heated, conversations on the Ocean Explorer's Facebook page.

Nor is he interested enough in figuring out what it is to pursue the matter further. The deep-sea exploration business costs money and despite the fortune the team made in 1997 when it discovered a load of 1907 Heidsieck & Co. Monopole Gout Americain champagne aboard the wreck of the Swedish schooner Jonkoping - 3000 bottles in all, some of which have sold for as much as $13,000 - Lindberg said the bottom line is what counts.

"It is not in our sphere of interest to go for this object, since it might be nothing. We cannot afford spending funds just to have a look at it, even if it might be a new Stonehenge," he said. "It is up to the rest of the world to decide what it is."