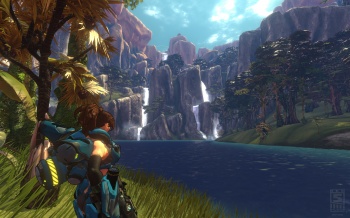 Mark Kern has been around successful MMOs for years. His time with Blizzard on producing Diablo and World of Warcraft has certainly informed every decision he makes at the studio he helped found in 2005. When Firefall was first unveiled at PAX Prime last year, he mentioned that the game would be ready by the end of 2011. That's why Kern was surprised when the media grew interested in comments he made in China that Firefall was still set to release in December. Perhaps his confusion is derived from the fact that Kern already considers his free to play shooter MMO already launched. Firefall is in Friends & Family beta right now, meaning that a small select group of people are already playing it - with a strict NDA, I'd imagine.

"We already consider ourselves 'launched.' We will not have a traditional beta, open beta, launch process," Kern told The Escapist Magazine. "We no longer feel this [cycle] makes sense in a modern, online, service-oriented business, especially a free to play game. Instead, we have modeled our launch after Gmail's invite system."

If you remember from way back in 2004, Google's mail service was rolled out very slowly with members only allowed a small number of invites that refreshed over time and Red 5 will emulate that concept with the Firefall beta.

"The way this works is that we bring testers and content up in layers," Kern said. "As each layer proves itself out, we give our testers invite slots, which they are free to send to their fellow gamers. We use different criteria to decide when and to whom we release more invite slots."

Invites will continue to be released slowly this way until the game is officially open to anyone who wants to download it come December 2011. "This process never stops, as it didn't stop for Gmail for a very long time. It's a great way to grow the game through people's social networks, which is what we want for our team and clan-oriented game."

This kind of system works because the content for the game is already in various stages of completion. Mark's comments about precentages was taken out of context and he's confident that there's more than enough available for the testers and for the launch final release in December.

"Game development has many parallel tracks, and some are harder than others. Our custom 3D engine and server engine, for example, is 90% complete. Our terrain and art and towns for December are also at 80% as is the art for NPCs, monsters, mobs, etc," he said. "We are a free to play game and we have a different go-to-market strategy than retail games. Just like League of Legends, we start with a great gameplay experience, get that right, and then the content will flow."

If you're interested in signing up for the beta, head over to the Firefall website and sign up for it. Kern says that they will be choosing more people to enter the beta later this month after PAX Prime.