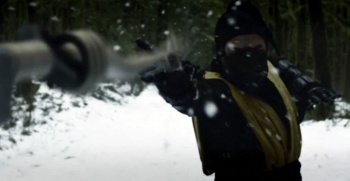 Mortal Kombat: Legacy may have started life as the film equivalent of fan fiction, but come this November, the series is headed to Blu-Ray.

Indulge me for a moment while I offer a short history lesson.

In June of 2010, a mysterious trailer hit the 'net starring everyone's favorite Mortal Kombat characters (and the incredibly charismatic Michael Jai White). It was a wholly new take on the franchise, simultaneously more realistic than the traditional storyline and also much, much more grim. Instead of a lizard ninja, Reptile was an insane serial killer with a rare birth defect and cannibalistic tendencies, for instance.

The buzz surrounding the clip was huge and Warner Bros. (the company that owns the rights to Mortal Kombat) asked creator Kevin Tancharoen to turn his vision into a web series. Not only would this expose more people to Mr. Tancharoen's brilliant creation, it would also promote the then-upcoming Mortal Kombat reboot from NetherRealm Studios.

The series was well-received, recently came to an end, and now Warner Bros. has revealed plans to collect all 9 episodes of Mortal Kombat: Legacy on a single Blu-Ray disc to be released on November 8. High-Def Digest reports:

Surprisingly absent from the announcement is any possible ties the release might have to the aforementioned game. I was at least expecting a code for some middling DLC trinkets. Maybe a Black Dynamite skin for Jax?