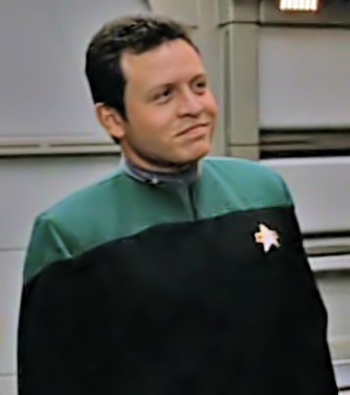 Then Prince Abdullah in an episode of Voyager originally broadcast in 1996.

King Abdullah II of Jordan is spearheading a $1.5 billion US project to build a Star Trek-themed attraction in his country.

As far as ideas for theme parks go, a place where Trekkies can experience what it may be like living in the 23rd century (24th if you're a TNG fan) is a pretty good bet. You might think that Paramount Studios, which owns the Star Trek license, would build such an attraction in California or Florida to attract a Western audience, but that's what a lame 21st century plebian would believe. In the future, the nation of Jordan stuck between Iraq and Israel in the Middle East is the "Crossroads of Civilization" that will host the world's largest Star Trek ride. Why has Jordan's King Abdullah II Fund for Development pledged a large part of the project's current budget of $1.5 billion? Because the current King Abdullah II is a huge Trekkie.

"They have a group of investors. The main Jordanian investor is the King Abdullah Fund," said Randa Ayoubi, from animation company Rubicon that will handle the "entertainment" aspects of the park. "There are many American and investors from the Gulf."

The 74-hectare park (roughly 180 acres) will boast 4 hotels and 17 rides or attractions. One of those will be a "space-flight" Star Trek adventure licensed from CBS and creatively developed by Paramount Recreation. The whole resort will not be Star Trek-based but the theme sets the small Muslim nation as a crossroads of civilizations, including ones from the future.

King Abdullah is very excited about the project, not only as a way to boost tourism to the Middle East after the political uprisings off the last few years, but also because of his Star Trek fandom. Just how much of a fan is he? Well, when he was just the Prince of Jordan back in 1996, Abdullah II actually appeared in the Voyager episode "Investigations" in a non-speaking role.

Now, visitors of his country will boldly go where no nation has gone before. To the future.