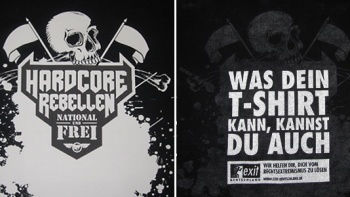 Neo-Nazis in Germany got a morning-after surprise when they discovered that the souvenir t-shirts they were given at a nationalist right-wing concert actually contained a secret, anti-extremism message.

Attendees at a "Rock for Germany" concert probably thought the t-shirts being handed out by festival organizers, emblazoned with a skull, flags and a "hardcore rebel" logo, were seriously hard-ass rockin'. But things changed rather dramatically when the shirts were washed [and yes, it would seem that even skinheads occasionally do laundry]: the gnarly artwork and "National und Frei" disappeared, replaced with a message offering assistance to anyone who wanted to escape the influence of the far right.

"If your t-shirt can do it, you can do it too - we'll help you get away from far-right extremism," the post-washing shirts said.

250 of the shirts were donated anonymously to the festival by Exit Deutschland, a group dedicated to assisting people seeking to break free of the militant neo-Nazi lifestyle. "Rock for Germany" organizers naturally played down the significance of the stunt; Gordon Richter, who's also a member of the far-right NPD party, said, "It's kind of pathetic that anyone spent money for something like that."

But Exit Deutschland founder Bernd Wagner seemed satisfied that the t-shirts had accomplished their purpose of spreading an anti-extremism message to a hostile audience, not to mention the international attention they've attracted to his cause. "We wanted to raise awareness about our program, especially among the young and less committed," he said.