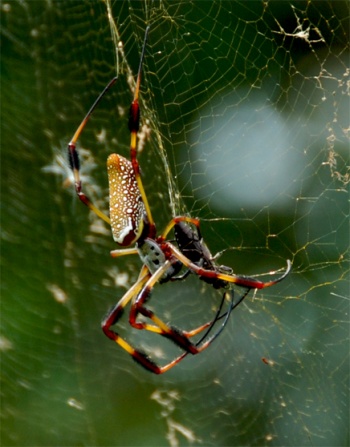 It turns out that human skin is a pain to grow for grafts, but spider silk is incredibly effective component at getting this to happen.

Science has been making some pretty cool discoveries/advancements lately. There was that new technique for rebuilding muscle in old people. And that way to power cars with pee. Oh, and the "discovery" that plate armor is heavy. Now, it turns out that a spider silk can be used to make human skin.

Because skin isn't all that tough - but is extremely flexible - it turns out that it's really hard to replace. As a result, skin grafts have to be built on top of material that's simultaneously flexible and strong enough that will let new skin cells grow successfully on top of it. Spider silk is notably stronger than human skin (proportionally, the stuff is actually stronger than steel and apparently has more stopping power than Kevlar).

In Hannover, Germany, Dr. Hanna Went of the Medical School of Hannover has created a skin graft base made from spider silk. She and her team "milked" golden orb web spiders (side note: How cool of a species name is that?) for their silk, which was then used to create a mesh that was stretched on a steel frame and sprayed with human skin cells. The flexibility and toughness of the silk proved to be a viable environment for the cells. Within a few weeks, there was skin suitable for grafting procedures.

So, once again, science proves itself to awesome. Granted, doing this on a massive scale is going to take some time, due to limited quantities of spider silk. However, you've got to admit that getting a skin graft and then claiming that you're now part spider is a pretty cool concept.