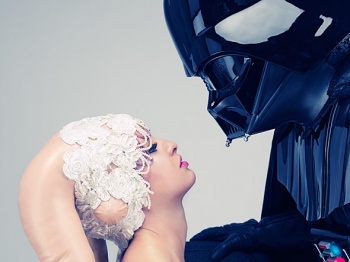 Search your feelings: You know this isn't going to end well.

If there was one thing to take away from George Lucas's Star Wars Prequel Trilogy (aside from the fact that Jar Jar Binks needs to die in a fire), it was that Anakin Skywalker probably wasn't the healthiest person to be in a relationship with. However, it turns out that Skywalker is apparently even worse to hook up with after he became more machine than man, based on a new series of photos.

The series "Dreaming of the Dark Side" was created by Marc & Louis Photography. The photos show just what happens when a sexy Twi'lek lady tries to seduce Darth Vader and - it looks like - give him a lap dance. Unsurprisingly, the seduction doesn't end well and a hapless Storm Trooper winds up having to clean up the mess.

Honestly, I'm not sure I'm more impressed or creeped out by this photo project. On one hand, the photography and costumes are stylish as Hell. On the other hand, it's about Vader killing a woman who tries to get down his Sithy-y pants.

You can see the full series in the gallery below and judge for yourself. Lord Vader has been a popular subject for photo projects, though the last photo series showed him on holiday instead of murdering women who were hitting on him.

Source: Marc and Louis Photography via Geeks Are Sexy