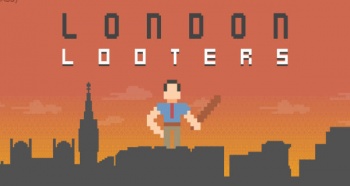 A new online game offers you the chance to play as a London electronics dealer during last weekend's riots.

Faced with the worst rioting seen in their city for decades, London's shopkeepers weren't left with many options for defence last weekend. In London Looters, a defend-your-shop Flash game created by Dutch designer Kenny Vleugels, your only choice is to beat back the thieving hordes with nothing more than your totally morally reliable vigilante-stick. You lose when the looters manage to escape with all of your shop's stock - which they inevitably will.

"After a certain amount of time it's nearly impossible to defend against the mob," said Vleugels, explaining that he "imagines that's how the shopkeepers must have felt." The game pelts an endless stream of looting sprites at you, inviting you to dispatch them with as much sickening, gleeful catharsis as you care to provide.

Vleugels added that his inspiration to build the game came from seeing photos of Aaron Biber, an 89 year-old barber from Tottenham, surveying the mindless destruction of his ruined premises after the first night of looting. Happily, though, an online appeal started by some sympathetic PR interns has already raised £35,000 towards the restoration of his shop, so he's probably feeling a bit better now.