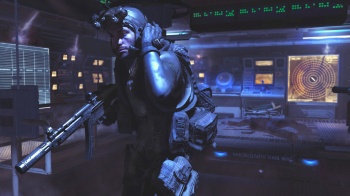 PC gamers have a reason to be happy: Activision and Infinity Ward have listened to their feedback about dedicated servers in the Call of Duty games, and will be including them in Modern Warfare 3. What's more, unlike Black Ops' dedicated servers, it won't cost a dime to run one.

Writing on his blog, Activision's Dan Amrich said that there had been a lot of complaints about cheaters on the PC in the original Modern Warfare, which had prompted Infinity Ward to try something different for Modern Warfae 2. Infinity Ward's solution, IWNet, wasn't as popular as it could have been, leaving Infinity Ward to go back to the drawing board. In the meantime, Treyarch had supported dedicated servers in Black Ops, but people objected to having to rent them, rather than just running their own.

Amrich said that there wasn't an ideal solution to the dedicated server issue, but that hardcore fans had made their preference known in no uncertain terms. This is great news for the PC Call of Duty community, as it gives PC gamers back the level of control they've grown accustomed to, as well as enabling them to make all the mods they like.