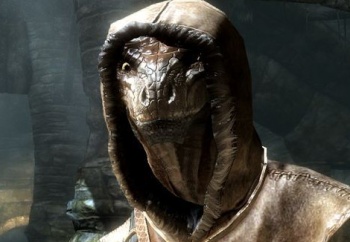 What happens when you regress a baby chicken in ovum to an earlier evolutionary state?

Though the above sounds like the premise for a Michael Crichton novel, it's actually a question posed by scientists working at Harvard University. Arhat Abzhanov and his team of evolutionary biologists realized that the the only valid way to answer that query was to just go ahead and engineer a chicken a few branches below our modern fowl on Darwin's personal Vitae Arborum.

The result has been dubbed a "snouted chicken." Courtesy Bethesda Softworks' upcoming The Elder Scrolls V: Skyrim, you can see a (tangentially related) artist's rendering at right.

The apt moniker actually describes a bird whose genes have been pushed just a few notches closer to those of its reptilian ancestors. The result is an avian facial structure that has more in common with the toothy grin of an alligator (or velociraptor) than the pointy beak of its feathered cousins.

That's neat and all, but how exactly do you "de-evolve" a chicken? New Scientist explains:

Abzhanov started by trying to pinpoint the gene changes that led to the myriad beak shapes of Galapagos finches. In 2004, he showed that all the finches share a handful of genes crucial to beak development, but instructions for the signalling molecules they control vary from bird to bird. Abzhanov realised that a similar process might underlie the much bigger evolutionary shift from snouts to beaks.

The tip of an alligator snout is made of a separate set of paired bones called the premaxillary, but in birds, these have fused with the main of the upper jaw to form a single, sharp bone.

Abzhanov scanned signalling molecules in alligator and chick embryos and found that two of them -- known as sonic hedgehog and fibroblast growth factor 8 -- show up before the snout and beak form. In gators, however, the molecules were only present along the sides of the face. Chicks express them both at the sides and centre of the developing face. What would happen, he wondered, if he turned that central expression off?

He developed a gel bead full of proteins that stick to the signalling molecules and deactivate them. As the molecules arrived at the centre of the embryonic chick face -- around day 5 -- Abzhanov added his bead to the mix. Sure enough, the chicks developed paired bones. "It looks exactly like a snout looks in an alligator [at this stage]," says Abzhanov.

As New Scientist also points out however, ethics regulations prevent Abzhanov from hatching any of the eggs created by his team.

Speaking of ethics, one must at this point wonder for what purpose exactly are these researchers turning back the evolutionary clock? Disease prevention? Genetic research?

"Long term Abzhanov, dreams of turning chickens back into Maniraptora, small dinosaurs thought to have given rise to the 10,000 species of birds around today," the article says.

While the science geek part of my brain is wildly excited for the potential this has to expand the field of genetics research, the part of me that read Jurassic Park at age 10 is frankly terrified. I like Jeff Goldblum! I don't want to see his legs smashed by a Tyrannosaur!