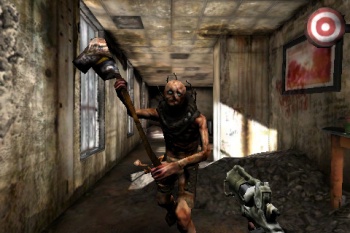 In celebration of the RAGE Facebook page hitting 100,000 "Likes," publisher Bethesda Softworks has decided to reward fans by dropping the price on both iOS iterations of the game.

Actually, "dropping" isn't quite accurate. Bethesda's generosity has completely removed the price from both RAGE and RAGE HD. Both games can now be downloaded absolutely gratis from the iTunes App Store.

It should be pointed out that this deal has one major caveat: It's a limited-time offer. You now have until August 25 at 12:01AM to download RAGE for free.

I should also probably mention that the iOS adaptation isn't exactly a port of id Software's upcoming PC/Xbox 360/PlayStation 3 shooter. So what is it exactly? I'll let the press release explain:

RAGE comes to your iPhone/iPad/iPod touch with the hit of the wastelands, Mutant Bash TV! This intense first-person shooter casts you in the starring role of a post-apocalyptic game show where you'll be stalked by hungry mutants while you scour pulse-pounding levels for ammo and cash pick-ups. Make a deal with J.K Stiles, the show's menacing host, and see if you have what it takes to survive this carnage-filled carnival of death!

What that fails to mention is that the game isn't really a first-person shooter either. I mean, it is, in the most literal sense of the word, but for the most part its gameplay is really more akin to on-rails shooters like Panzer Dragoon, than DOOM.

That's not a value judgment by any means. I've been playing RAGE all morning and am totally into it. I just thought I should warn you all before you download the free game and go looking for non-existent WASD analogues.