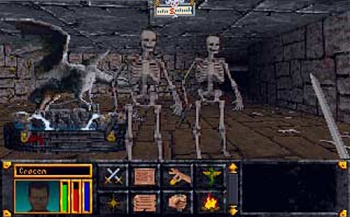 Notch has taken a light-hearted approach to his legal wrangling with Bethesda so far but says that if push comes to shove, he'll fight the publisher in courts "for as long as it takes."

When Bethesda's legal department came calling on Mojang with a letter claiming that its new game, Scrolls, infringes upon Bethesda's Elder Scrolls trademark, Minecraft creator Markus "Notch" Persson reacted in a surprisingly laid-back fashion, saying, "I still <3 Bethesda. This is hopefully just lawyers being lawyers." He upped the ante earlier this week by challenging Bethesda to settle the matter with a 3-on-3 Quake 3 deathmatch. But he's also made it clear that it Bethesda insists on playing hardball, he's ready to fight.

"If we're going to court, I will fight this for as long as it takes," Persson told Wired. "It's a bogus claim, and [Bethesda has] several one-word-named games that share a noun with other games that precede [them]," citing id's upcoming Rage, which based on Bethesda's argument infringes upon Sega's Streets of Rage games.

Bethesda could still turn the PR situation around by accepting his deathmatch challenge, he said, even though he acknowledged that picking the Bethesda-owned Quake 3 might have been a mistake. "If it came to a Quake 3 tournament, I have a feeling we might just have to change the name," he joked. "In retrospect, it might have been the wrong choice."

But Bethesda might have the edge in the courtroom as well, according to attorney Mark Methenitis. "The basic question here is whether the two trademarks are likely to be confused," he said. "There's a pretty well-established test for this under U.S. trademark law and based on those factors, Bethesda has a reasonable argument."

"To me, the real question is the strength of The Elder Scrolls," he continued, noting that the Elder Scrolls games are far more commonly known by their subtitles, like Daggerfall, Morrowind and Oblivion. "Even then, I wonder about the relative strength of Scrolls without Elder. That strength of the mark factor, along with evidence or lack of evidence of actual confusion, could be the determining factor."

Persson said that Mojang's lawyers are in contact with Bethesda's legal department but admitted that he doesn't really know what's going on otherwise, describing the situation as "terribly boring."