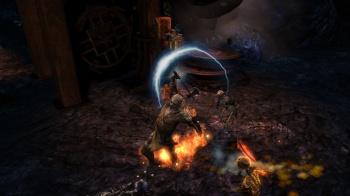 Bedlam Games, the studio that released D&D: Daggerdale, is apparently on its way out after only one game.

When Bedlam Games' Dungeons & Dragons: Daggerdale came out a couple of months ago, it was met with resounding shrugs of indifference. As The Escapist's own Justin Clouse pointed out in his review, the game had a lot of content to love - but only if players could overlook the various other shortcomings that kept on popping up throughout the adventure. Apparently this wasn't good enough to get people to buy the game, and most of the staff at Bedlam has been let go.

Following up on a tweet from "veracious_shit" about layoffs at Bedlam (this account was the one that helped break the news about trouble at Team Bondi last year), Joystiq followed up with some studios to see if the claim was true. An anonymous source claimed that "around 90 percent of Bedlam employees are officially on 'temporary layoffs.'"

While this sounds bad, it gets worse: No severance pay has been offered to these suspended employees. Not only that, but they're not expecting to get hired back, since several have gone on to new positions at other companies.

Our thoughts are with all those laid-off, and hopefully they land on their feet soon.

I Was Betrayed! Greg Tito 45 Comments