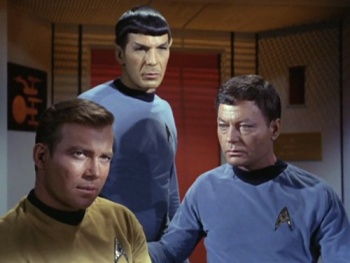 1947 Entertainment owner David Foster thinks it's time for Star Trek to come back to the small screen.

It's been a few years since the last time a new Star Trek series graced our television screens and while the most recent addition to the franchise, Enterprise, was built on a cool premise, it never caught fire with fans and was canceled after a disappointing four seasons. Prior to that was Voyager, which ran for seven seasons from 1995 to 2001, Deep Space 9, which also made seven seasons from 1993 to 1999, and the big dog, Star Trek: The Next Generation, which revived the Trek franchise in 1987 and lasted for seven seasons of its own.

But if Foster has his way, yet another Trek series will be on the air soon. He's been working on an idea for a new Star Trek series since 2006 and things are apparently now at the point where he's just about ready to make an official pitch to CBS.

"The series concept is fully developed, subject to change of course, with a solid 5-7 year series plan, pilot script and a conceptualized finale that intends to define Star Trek for generations, extensive character bios, costume and ship/set designs, and more," he said at the 2011 Star Trek Convention in Las Vegas. "This is a drastic departure from the typical 8-10 page treatment of the previously pitched Star Trek series ideas that have not included even a pilot script."

Foster's plan is to set the new series in a post-Voyager era but return it to its "original series roots in big and mighty ways." It won't follow the timeline established in the 2009 Star Trek film, which he views as an "alternate canon," but will instead stick to the "positive view of the future" as envisioned by Gene Roddenberry in the original Star Trek and TNG series. Not that the galaxy will be the happiest place ever; Foster said the Klingons in his series are growing tired of having to rely on the Federation for support following the Praxis incident [look it up, non-nerds] while the Ferengi have stumbled upon some kind of new resource that has given them a windfall of wealth and power.

"Numerous individuals with Star Trek experience are supporting our endeavor with encouragement and advisory roles, including prior producers, visual effects, script writers, and more," Foster said. "We are currently working on obtaining the right executive producer for the series, and have passed on requests by a couple of interested parties."

Is the world ready for a new Star Trek series? Following the collapse of Enterprise and the box office failure of Star Trek: Nemesis, the feeling seemed to be that the viewing public had had its fill of boldly going where no-one had gone before. But then J.J. Abrams blew the lid off things with his 2009 Star Trek reboot, which proved that the franchise could attract a mainstream audience. Foster appears ready to follow the same path; he said the series will be "highly-energized with a much younger cast, and uses cutting-edge future technologies with newly-envisioned special effects and designs."

So what say you, Trekkers? Does this sound like a good idea, or does the thought of a new Trek series make you want to go looking for your Firefly DVD set?