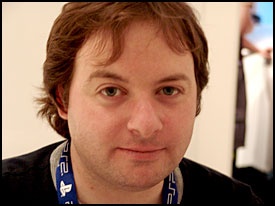 When the lead designer on classic games like God of War and Twisted Metal speaks, you listen.

PAX Keynote speakers like Ken Levine and Wil Wheaton are hard acts to follow, but Jaffe certainly made a go of it. Speaking to an immense throng of badge-wearing nerds packing the Paramount Theater in Seattle, the famed (and sometimes feared) designer kicked off the 2011 Penny Arcade Expo with a funny, heartfelt, and profanity-laden talk.

He began by speaking about (go figure) his beginnings. Jaffe attended the University of Southern California, where he failed to be accepted into the film school. It was while he was attending that he saw a speech by semi-legendary producer Jeff Katzenberg, who told the assembled audience that "If you're going to create great entertainment, then you don't need a roadmap. You're going to get there anyway. Nothing I say will change that."

Laying on the anecdotes, Jaffe talked about how this idea drove him to Sony and eventually God of War, saying that he felt he deserved to make great games. "Somebody was going to make these games," he said, "so why not me?" At this point in his life, he claimed, he was filled with passion, drive, and an inner voice that guided him in his endeavors. In making the first God of War, he said that he was driven to make "A game that felt like an adventure."

At some point, he said, the voice left him. When he started caring more about the money or the fame, or working on projects that he wasn't passionate about, the voice said, "'I'm going to go hang out with Ken Levine, because you aren't fucking listening to me.'" Jaffe felt that he was out of touch with the current generation of games, that he was on the wrong side of 40, and that he couldn't connect with today's gamers.

But according to Jaffe, the voice just needed some prompting to come back. An idea clicked with him; "Great Gameplay Travels." His problem with the games of today wasn't that he was 40 or that he dislikes current games; the problem was that he loves gameplay, something that he thinks has taken a backseat in a lot of the big games of today. Great gameplay, he believes, is what makes a game last. Not graphics, not the IP, and not the setpieces, but the gameplay.

He closed by talking about how proud he was of the reception his new Twisted Metal is getting from fans at E3, PAX, and around the internet. He told all those in attendance that if the found a game at PAX that really clicked with them, to find someone who worked on the game and tell them so. He said that there is a connection between game creator and game fan, and that for many of those in the industry, it's "very personal."