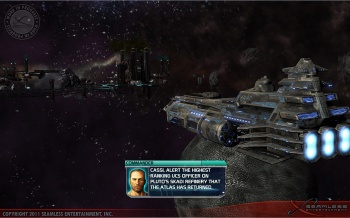 A developer who transitioned from AAA development to the independent scene laments publisher's refusal to take risks.

Chris Stockman has been around the block, man. (heh) He was the design director on the first Saints Row at Volition Games so he is well aware of the relationship between developer and publisher. Many of the stalwarts at Volition would love to continue the Freefall franchise they began in the late 90s, but the publisher THQ and Interplay own the IP and don't think the market would support a space combat sim. Stockman was so passionate about reinvigorating one of his favorite genres that he quit Volition and decided to strike out on his own. He doesn't understand why publishers won't take a chance on a genre that is crying out for a renaissance with all of the technology available to game designers now.

"Most publishers are not innovators," he said tome at PAX. "They are followers."

"No one has done a really successful space [combat] game. I think as soon as someone does, you will see the trail of people who will line up and do space games," said Stockman. "Once GTA was successful, how many open-world games came out after?"

Stockman hopes the game he's making at Seamless Entertainment - SOL: Exodus - is the title that accelerates the genre to lightspeed, but he's been up against publisher opposition from the start of development.

"The key is convincing people that this [genre] can sell. It's been like pulling fucking teeth," he said. "That's why we came to PAX, to show that there are still people interested in this game. There's still people who want to play [a game like SOL: Exodus. And you guys that don't want to take that risk, we hope that risk is mitigated by showing that fans of the genre are into it and they just want something good."

Seamless's SOL: Exodus may not be a home run but I respect that Stockman's company is at least swinging for the fences. Publishers take note: I am definitely one of the fans who has been clamoring for such a title and I'm sure there are people in the comments section who will say they'd love to play it or something like it, too.

Please, give SOL: Exodus and the space combat sim genre the shot it deserves.

Gallery of the Day: 8 Defunct Developers We Wish Were Still Around DrStrangelove 21 Comments