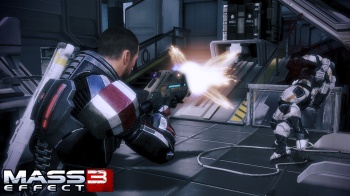 BioWare may have revealed that Mass Effect 3 will be the end of Commander Shepard's story, but that doesn't mean that the character isn't going out in a blaze of glory. Based on a ten-minute hands-on demo I got to play at PAX Prime, it's pretty obvious that Shepard and his crew have never been tougher.

The demo was, essentially, one prolonged firefight. The set-up is that Mordin Solus has found a cure for the genophage that rendered nearly all the females of the Krogan race sterile. However, Cerberus is trying to prevent Solus and his test subject - a Krogan female - from getting out of the facility they're in. As a result, Shepard, Garrus, and Liara have to fight off Cerberus forces, ensuring Solus and the Korgan can make a safe escape.

Players have to travel through multiple levels, each one swarming with Cerberus shock troopers, until they make it to the roof of the facility and wind up squaring off against an immense mech. Unsurprisingly, there's a huge amount of action and very little story to digest.

That said, this was one of the most enjoyable action sequences I'd seen in a Mass Effect title (and I've played through both games so far). Because the enemies kept coming and I was under a time limit to make sure Solus was safe, things felt incredibly frantic; this was a little unexpected, as the squad actually started out at incredibly high levels with full access to their powers.

The combat itself felt incredibly satisfying, mainly because the difficulty seemed tougher than before. The Cerberus troopers featured some pretty solid AI that provided a solid challenge for my squad. On top of this, Shepard sported an impressive new close-combat attack that can be activated by holding down the melee button.

When this ability is used, the omni-tool manifests, sporting a wicked-looking blade that Shepard proceeds to do terrible things to his enemies with. These attacks are stunning to watch, thanks in large part to how utterly brutal they looked on screen.

Unfortunately, the mech battle was the least-impressive part of the level. While the mech looked great and could soak up a ton of damage, it was pretty easy to overwhelm with combined special abilities.

All in all, Mass Effect 3 feels like it's going to have some fantastic battles to play through. Needless to say, waiting until March 6th of next year just became that much more difficult. In the meantime, feel free to whet your appetite with these new screenshots from BioWare.