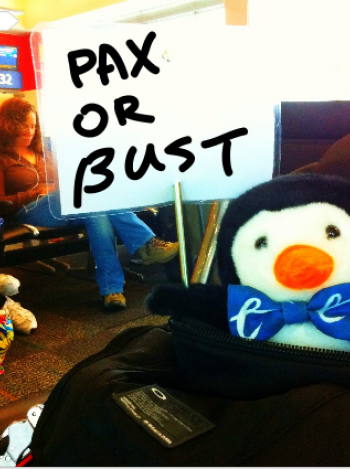 Games, cosplayers, and a penguin in a bow tie. PAX had everything this year!

If you spent some time at PAX Prime this past weekend, odds are that you saw some pretty crazy stuff. There were some massive booths, insane crowds, lots of swag, and ... me. The penguin in a bow tie. Hey, I'm Winston. How's it going?

Contrary to popular opinion, being a penguin isn't all it's cracked up to be. At least, it isn't when you're also a gamer. The controllers don't fit your flippers, electrical sockets aren't all that easy to come by, and ... well, it's really cold. Basically, it's exactly like the final panel of this recent Penny Arcade strip. I needed a change of scenery, so when I found out that Mike "Pretty Princess" Thompson was going to PAX Prime this year, I asked if I could tag along.

Mike was able to sneak me in as a member of the Escapist's news crew (his Special Lady Friend even made me a matching bow tie so people would know that we were part of the same team, as well as a sign that I could use to communicate with everyone). As we meandered - OK, I may have waddled - around the show floor, I got to meet a lot of amazing folks and see some great new games. Mike was good enough to to grab some photos my adventures and new friends, all of which are included here.

To everyone I got to meet: Running around the show and meeting all of you was amazing, especially since everyone was so great as to pose with me. I hope I get to see you all next year at PAX Prime 2012!