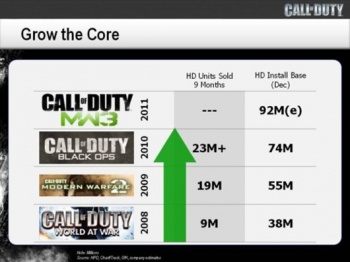 Activision shifted over 23 million copies of Call of Duty: Black Ops and 18 million map packs over the first nine months of its release.

That's a lot of sales. So many, in fact, that Activision felt the need to record it all in this handy chart, measuring sales of its ludicrously popular murder-simulator against the combined install base numbers of the Xbox 360 and PS3. Needless to say, the sales numbers have gone up with each installment. For comparison, Black Ops made $650 million in its first five days of release, compared to the mere $550 million record set by Modern Warfare 2.

Those controversial $15 map packs seem to be selling like hotcakes as well. Black Ops owners have purchased over 18 million of them, earning Activision a cool $270 million. If my vole-level math skills don't fail me, that works out as 13.5 million of your earth dollars per map, very nice.

However, the gold-plated execubots at Activision aren't counting their insanely profitable chickens before they hatch, and as such, haven't released any predictions for the upcoming Modern Warfare 3's performance. They do, however, predict a 20% increase in the HD console install base, which in turn, likely means more games sold. Oh, and the way their little chart is framed kind of implies that they're guessing MW3's sales are going to be somewhere between "absurdly large number" and "Haha. Now we can buy the sun."

You may now begin complaining.