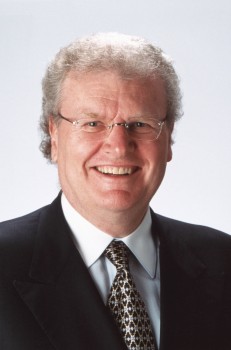 Howard Stringer gave a short but defiant speech claiming his company is over the hacking.

Stringer sees nothing but blue skies ahead, and other similar platitudes. Despite the massive failure of its security protocols leading up to the takedown of the PlayStation Network this April, the first non-Japanese CEO of the massive electronics and entertainment company reports that PSN has actually increased membership since the attack. Stringer is confident that the bad days are over for Sony and that its investments in tying all of its varied products - tvs, game consoles, movie productions, to name a few - will reap great success moving forward.

"I'm pleased to tell you that the [PlayStation Network] is more secure and better than ever," Stringer said at the IFA conference in Berlin, Germany. "We are aggressively expanding its content. We have more than 3 million new customers since the network came back online, and sales are exceeding what we had before the cyberattacks."

Over the past 12 months, the company has seen everything from earthquakes and tsunamis to hacker vandalism. "This year, we at Sony have been flooded, we've been flattened, we've been hacked, we've been singed," he said. "But the summer of our discontent is behind us."

He believes the combined approach of marketing all its products closely tied together will each of Sony's competitors: "Yes, yes, Apple makes an iPad, but does it make movies?" Stringer asked. "Warner Bros. and Fox produce fine movies, but what about their cameras and smartphones? Sony is where art meets technology."

While the prospects of that claim are dubious, I'm happy to see that the CEO of Sony believes that the dark times are behind him. Of course, it's rare to hear a CEO say, "We're screwed," but I respect the man's optimism.