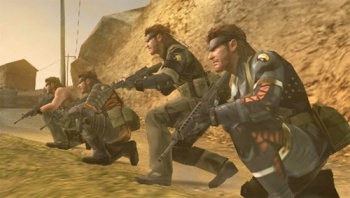 What could be more exciting than sneaking around disguised as a box and ambushing enemy soldiers? How about doing so with a friend?

Hideo Kojima's upcoming Metal Gear Solid HD Collection has a lot of fans excited about its fast-approaching release. However, the latest news from the man responsible for Solid Snake will undoubtedly help stir up even more of a frenzy: The included version of Metal Gear Solid: Peace Walker will feature online co-cop gameplay.

The co-op play is set to be included in both the PS3 and Xbox 360 versions of the game. Not only that, but it's online co-op will be available in the PSP build:

It is possible to play the PSP version online, but to do so requires Sony's "adhocParty" app, and a connection to a PS3 that is using a wired internet connection. This version will be as simple as it is with any other Xbox Live/PSN game. And, Kojima confirmed, it'll run in 60 frames per second even with 4 players.

Metal Gear Solid HD Collection is due out for the PS3 and 360 on November 8th.