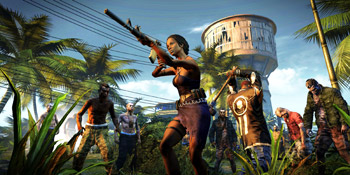 Developer Techland has included some less-than-PC language in the code for Dead Island.

The code for Dead Island has turned up some interesting things. Earlier in the week, it was revealed that the version of the game on Steam was actually a debug version never intended to be seen by the public, and today we've learned that someone on the dev team seems to have an "interesting" attitude towards women.

Tucked away in the code for Purna's - a former cop, turned bodyguard - skills is an entry for a skill called "FeministWhorePurna." Steam user AlekseiVasiliev discovered the entry, and posted it to the official Steam forums. It's thought that the entry refers to Purna's "Gender Wars" skill, which grants her a bonus to the damage she deals to male zombies. The fact that other entries in the file have names like "MeleeDurabilityPurna" and "TeamSpirit2Purna," which don't directly refer to the skills Purna uses in game, make this scenario seem all the more likely.

I'd imagine - or hope, at least - that this is some really, stupendously, dumb in-joke at Techland, and not indicative of someone's actual attitudes. All the same, this is not something that should have made it into the final code, even if Techland didn't think that anyone would see it. We've reached out to Techland to see if it has any comment on this discovery and will update when and if we hear anything back.

Update: Techland has issued a statement regarding the issue.

It has come to our attention that one of Dead Island's leftover debug files contains a highly inappropriate internal script name of one of the character skills. This has been inexcusably overlooked and released with the game.

The line in question was something a programmer considered a private joke. The skill naturally has a completely different in-game name and the script reference was also changed. What is left is a part of an obscure debug function. This is merely an explanation but by no means an excuse. In the end that code was made a part of the product and signed with our company name. We deeply regret that fact and we apologize to all our customers or anyone who might have been offended by that inappropriate expression.

The person responsible for this unfortunate situation will face professional consequences for violating the professional standards and beliefs Techland stands for.