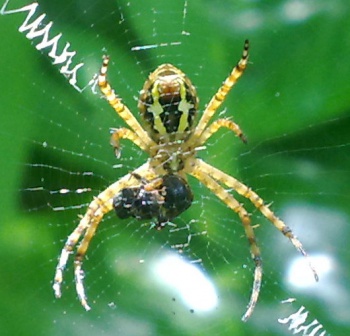 Researchers at Pennsylvania State University have developed self-directed, blood-borne "micro spiders" that they hope can repair the body from the inside.

If that sounds like the nanobots sci-fi authors have been promising would rejuvenate us for the past quarter century, you've been paying rapt attention. These spiders would function in much the same way as those theoretical 'bots, though the really impressive bit here is that thanks to Penn State scientists, this dream is no longer theoretical.

Also, much to the chagrin of journalists hoping to paint a grim future filled with minute, shiny arachnid overlords, these "spiders" aren't really spiders at all.

Ayusman Sen of Pennsylvania State University in University Park and his colleagues have created the self-propelling microspiders using spheres less than a micrometre wide. Each sphere is made up of two halves - one hemisphere is gold, the other silica - and looks like a gold-and-silver Christmas bauble.

To turn the spheres into motors, the group attached a Grubbs catalyst - a molecule that builds long chains of smaller molecules - to the silica side. When Sen drops his spheres into a solvent containing the chemical norbornene, the catalyst spins a polymer from molecules of the chemical. Eventually there are far more unpolymerised single molecules of norbornene around the gold side of the sphere than the silica side , creating an osmotic gradient, as fluids will always move from a region with lots of particles to a region with fewer particles. The solvent rushes toward the gold side of the sphere, causing the whole sphere to move.

In layman's terms, these machines -- which Sen hopes can be powered by elements already found in the body, such as glucose -- travel through the blood stream using a chemical motor, seek out damage, and spin webs of "medical glue" to patch up any holes the patient might have.

It's an idea that is brilliant in its superficial simplicity, and the progress Sen's team has seen so far is quite remarkable. Assuming they are able to coax the 'bots into seeking out damage properly, using "motors" attracted to the secretions of wounds, this could be a huge step both in non-invasive medical treatment, and the overall health of the human body.

On the other hand, if these 'bots suddenly develop a taste for chemicals found in other, non-damaged parts of the body, they could do irreparable harm to their hosts. Unfortunately, I still can't spin that into a hellish future dystopia where we all slowly suffocate inside cocoons while our robot masters daintily sup upon our vital fluids, but here's hoping Sen can get all the kinks worked out before someone ends up with their prostate glued to their left arm.