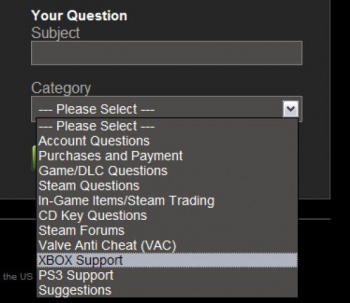 Microsoft's miserly hold on online content for the Xbox 360 might be loosening, if an option buried deep in Steam's customer support menu is any indication.

Valve has been pining for a way to get its digital content delivery system onto the Xbox 360 for going on a year now, and it might finally be getting its wish.

Of course, a buried menu option is far from anything resembling conclusive evidence, and neither company has as of yet made any announcement of any sort of deal allowing Valve's third party content supply onto the normally closed Xbox 360 platform. On the other hand, perhaps Valve snuck in a subtle clue to a deal being made late last month, and we just weren't paying attention.

Valve's major exhibit at this year's Penny Arcade Expo was a playable demo build of the upcoming Counter-Strike: Global Offensive. I had a chance to chat with one of the employees, who walked me through some of the new features of the game. One of these lauded new features was that the game was cross-platform, and that gamers on the PS3, PC, Mac, and Xbox 360 would all be able to play against and with each other.

Wait, hold up ... players on the 360 will be able to go up against PS3 players? Considering Microsoft's stranglehold on online content, that shouldn't be able to happen. Unless, of course, Valve and Microsoft had brokered some sort of deal allowing the use of Steamworks (Valve's home console version of Steam) on the Xbox 360.

Still, until one of the companies makes a formal announcement, the matter is merely speculation. If only there was some sort of immense gathering of industry giants and throngs of gamers coming up in six or so days, perhaps in a major Japanese city, at which to make such an announcement. Wouldn't that be great?