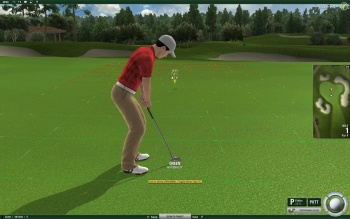 EA Sports is apparently offering refunds for the PC version of Tiger Woods PGA Tour 2012 after the game turned out to be substantially different than the console versions.

Team PC hasn't seen a version of Tiger Woods PGA Tour since the '08 edition of the game, which actually came out in 2007, so you might think that mouse-and-keyboard golfers would be singing hallelujahs over the return of the series 2012. But that doesn't appear to be the case; in fact, based on complaints posted on both the EA Sports forums and Reddit, overwhelming disappointment appears to be a little closer to the mark.

The problem stems from the fact that the PC version of the game is not a straight-up port of the console release but is instead something much more like Tiger Woods Online, the browser-based free-to-play golf game EA launched last year. That's not a crime in itself but EA's Tiger Woods site does a very poor job of differentiating between the PC and console versions, despite the fact that at least one feature touted on the front page, "The Caddie Experience," is only available to console players. It's confusing, to put it mildly, as even the page on the site dedicated to the PC version makes no mention of any front-page features that have been included. One of the forum moderators even suggested that users post their complaints in the Tiger Woods Online forum, "as that is where the EA devs are looking at feedback, not here."

It's an ugly situation but EA is apparently doing its best to put out the fires by giving refunds to at least some disgruntled gamers. Several forum posters have said that support reps has been very forthcoming with offers for refunds and while the company hasn't stated that this is a blanket policy, as yet there have been no complaints about refused refunds. Refunds can be requested through EA's live chat at customersupport.ea.com and are apparently taking anywhere from three to ten business days to process. It's not perfect but given how badly EA sliced it on this one, it's about as good as anyone can expect.

UPDATE: Electronic Arts responded to our inquiries with the following statement:

"Tiger Woods PGA Tour 12: The Masters for PC/Mac is a unique experience that combines some of the best single-player game modes of the console version with the accessibility and multiplayer offerings of Tiger Woods PGA Tour Online. We address each customer service inquiry on a case-by-case basis and customer satisfaction is our top priority."