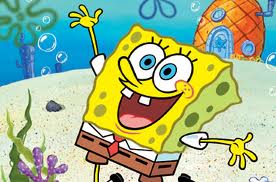 Pediatricians claim that watching 9 minutes of SpongeBob's antics could ruin a kid's whole day at school.

Before videogames took up the toxic torch, kids watching too much TV was a common scapegoat for the corruption of our youth. Now it appears medical science has returned to its old punching bag of fingering cartoons as the reason why Jimmy doesn't want to learn his multiplication table. A study conducted by psychology professors Angeline Lillard and Jennifer Peterson from the University of Virginia put 60 4 year olds in front of a TV playing 9 minutes of SpongeBob SquarePants, while others watched the PBS cartoon Caillou or drew pictures. The kids who watched SpongeBob were demonstrably worse at accomplishing mental tasks immediately after exposure when compared to the other activities.

"I wouldn't advise watching such shows on the way to school or any time they're expected to pay attention and learn," said lead-author Lillard. The tests the children were given varied from a Tower of Hanoi-like puzzle to the delay of gratification. The latter test just sounds like torture for a 4 year old child:

The kids who watched Spongebob did not wait as long as the kids who did not, and the researchers believe that the fast pace of the Nick cartoon is the reason why.

A spokesman from Nickelodeon disputed the conclusions of the study, pointing at the small sample size, the lack of a diverse group of kids and the tiny fact that Spongebob is meant for much older kids. "Having 60 non-diverse kids, who are not part of the show's targeted [audience], watch nine minutes of programming is questionable methodology and could not possibly provide the basis for any valid findings that parents could trust," said David Bittler from Nickelodeon.

Nah, dude. SpongeBob is weird. There's no way I'm letting my kid watch it, especially now that I know she'll never be able to wait 4 minutes for marshmallows after watching it.