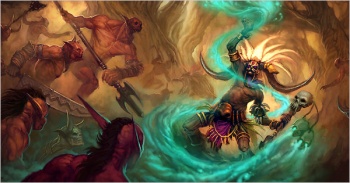 There's plenty of money to be made on PC, says Blizzard, as long as you're willing to put the effort in.

That's not to say that Blizzard won't make console games, but it's only going to make them when it's appropriate. He said that, despite appearances, Blizzard was not just a PC developer. Instead, it was a game developer that happened to make games best suited to the PC. "We don't believe you can make a Starcraft-style RTS and make it great - Blizzard great - on console," he added. He said that it was sad that people had bought into the idea that the PC was a dying market, but admitted that that idea may have helped Blizzard to succeed.

"If people think that you can't make money from the PC they should really look at us as a symbol and they should really be asking why we're so successful. It's primarily because of the quality of the games, but when you have a high quality product, very little competition and a high install base..."

Wilson may just have a point. StarCraft 2 apparently sold more in its first week in the UK than the first Star Craft did in its entire lifetime, and has since gone on to sell nearly five million units. Of course, Blizzard has established brands to work on, which gives it something of an edge over a new IP of equal quality.