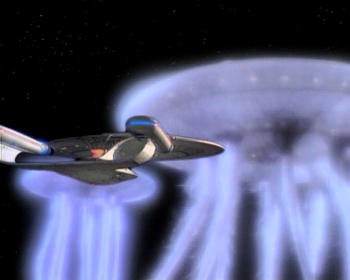 The Enterprise's chief engineer approves of the Blu-Ray version of the Next Generation. This would seem to be a good sign.

When Star Trek: The Next Generation finally makes it onto Blu-Ray, it won't look quite the same as you remember it, as CBS is replacing all the special effects with new and improved versions as part of the conversion process,

This isn't CBS mucking around with the show George Lucas-style though, it's something it has to do to make the show HD. While the raw footage is ready to go for a high definition upgrade, the version that made it to our screens is not. All the special effects were done on standard definition video, so for the Blu-Ray version, they all have to be redone, from the lowliest phaser blast to the grandest space battle. Earlier this month, LeVar Burton - who played Lieutenant Commander Geordi La Forge on the show - saw some of the upgraded footage and said that his mind was blown by it, so it sounds like things are coming along nicely.

As you might imagine, replacing all the special effects in a sci-fi show is a pretty daunting task, and apparently, CBS isn't doing the whole show at once. Sources say that CBS plans to release a four-episode teaser first, which includes both parts of "Encounter at Farpoint," from season one, "Sins of the Father" from season three, and "The Inner Light" from season five. Presumably, if the teaser proves popular, CBS will start work on the rest of the series. The teaser is supposedly coming out around Christmas.