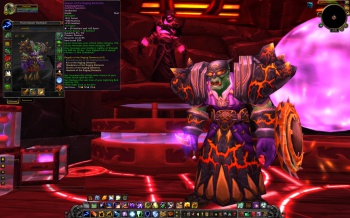 Tito: When 4.3 releases, will the random Deathwing encounter in zones still occur?

Brack: That's a really good question. We haven't talked about removing the random Deathwing encounters so I think that will continue to the end of 4.3.

Tito: So you'll be able to get that Feat of Strength after this launches?

Tito: I've read about some of the features on the WoW website. What can you tell me about Transmogrification and Void Storage?

Brack: We've got two features that really tie together. One is Transmogrification. The idea behind it is that we're going to allow you to take your item that is a very high level item that you've used and then replace it with the appearance of something that you've had for a very long time. Maybe you've really enjoyed the tier two paladin gear - which is something that player's really like - or you've got your epic sword from Onyxia or your epic helm from the very first original old school Onyxia or you like the tier six priest shoulders that came out with that tier of content. Whatever speaks to you and you really like as most representative of your class in terms of weapons or armor. To be able to take that appearance and then use that for what your current gear already is.

Tito: What about the Void Storage?

Brack: The piece that goes with that is the void storage component. The concept behind void storage is that we wanted to give players a way to store a lot of these items that they've had for some time or give a few players a place to put these items that they would like to keep around a little more. The idea for void storage is it's not instantly accessible like your bank is but it's something that's long term that you're only going to pull out on an infrequent basis. A very large area, long term cold storage, for any kind of series of pieces that you have for your gear.

Tito: The impetus for players to not to take items out is that there is going to be a gold cost associated with that. Is that correct?

Brack: Sure, they can do that if that's what they want to do but the idea was this is for items that you pull out very infrequently as opposed to your bank which is more or less immediate access.

Tito: Do you know how the gold cost is going to be calculated? Is it going to be based on the item level or is it going to be like the talent system where it incrementally goes up each time that you transact with that item?

Brack: We have not actually decided how that is going to work. Both ideas that you brought up are on the table. What we're leaning to right now is that it will be based around ... there will be some factor with the actual cost of the item. Every item in the game has an actual gold cost, you can sell those items to a vendor for a quarter of that cost. It may be based around that cost. We have discussed a progressive cost but I don't think that's a right decision anymore. We haven't nailed down exactly how we're going to calculate the gold cost. There will be a gold cost.