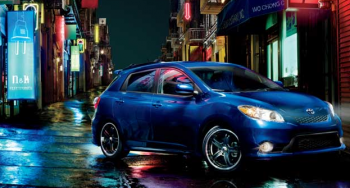 Sure, creating a bunch of fake online personalities to harass and threaten people seemed like a good idea at the time ...

Viral ad campaigns are often difficult to pull off right. For every "I Love Bees", there's about a dozen failures like "All I Want For X-Mas Is A PSP" and Toyota's "Your Other You" ad campaign is an extreme example of the latter. Not only does it sound like a terrible promotion, but a judge has now ruled that a woman can sue the car manufacturer for $10 million.

Amanda Duick was signed up for the campaign by a friend visited YourOtherYou.com (which is no longer online). The campaign was designed to target men in their 20s because Saatchi & Saatchi LA - the ad agency behind the stunt - concluded that this audience "loves to punk their friends."

That logic just promises to lead somewhere terrible rather quickly, doesn't it? Don't worry, it totally gets there in record time.

Duick started to receive a number of frightening emails from a stranger whom she'd never met. He had her home address, told her he was on the run from the law, and was going to be hiding out at her house (along with his pit bull named Trigger).

According to a court document (.pdf), "Sebastian Bowler," who appeared to be a 25-year-old Englishman and soccer fanatic with a drinking problem (based on the MySpace page he sent Duick), told the plaintiff that he was on a cross-country road trip and would be at her house in a few days. After Bowler wrote that he'd run into some trouble at a motel, Duick received an e-mail from someone purporting to be manager of the motel, who included a bill to Duick saying she was responsible for a TV Bowler had smashed.

Unsurprisingly, Duick was pretty frightened by the emails before she received a message from Toyota explaining that she'd been punked as part of an ad campaign for its Matrix car line. It turns out that the entire campaign's purpose was to get people to sign up their friends, choosing one of five online personas to harass them. The targets would then freak out, thinking a total stranger personal information like their home address and phone number and were coming to visit in person.

Duick wasn't amused. She sued Toyota, Saatchi & Saatchi, and fifty people associated with the campaign for "intentional infliction of emotional distress; unfair, unlawful, and deceptive trade practices; and negligent misrepresentation, among other things."

Toyota, also unsurprisingly, moved to get the suit dismissed. The company claimed that the online terms-of-service agreement that Duick clicked on authorized the campaign to send her emails and that "disputes over the campaign would have to be handled through arbitration."

However, a California Appellate judge has ruled that Toyota used false pretenses to get Duick to click on the agreement. Instead, Duick thought she was signing up for an online personality tests and subsequently started receiving emails from the creepy soccer hooligan.

Reading through how this campaign worked, it's hard not to think of EA's flawed alternate reality game Majestic, which used similar tactics of having virtual personas contact players in the real world, making them believe they were in the middle of a sinister conspiracy. The game was put on hold after the September 11th attacks and subsequently canceled a few months later because (according to EA) there weren't enough folks playing it.

You'd think that someone at Toyota would've realized that an ad campaign like "Your Other You" was a bad idea. When the company that's responsible for the amazingly terrible PR campaign of Dante's Inferno doesn't want anything to do with a program like this, that's a definite sign that it should be avoided like the plague.

Based on my extensive legal knowledge (learned from watching countless hours of Law & Order), it looks like this is going to prove to be a very embarrassing, and potentially expensive, lesson for Toyota.